Things about Pokémon GO Adventure Sync You Should Know

If you’ve been playing Pokemon Go for a while, you may have come across the Adventure Sync feature in the game. It’s a pretty unique feature that you may not find in any other game right now. To put it in simple words, when Pokemon GO Adventure Sync is enabled, you’ll receive certain rewards & in-game credits, even when you’re not playing the game.

The key idea behind this feature is to encourage people to get more physical activity and stay fit. However, ever since its release back in November 2018, Adventure Sync has forced players to raise several queries. While some players don’t know how to enable this feature, others are skeptical about this process.

So, in today’s guide, we have decided to share a comprehensive insight into Pokemon Go Adventure sync and how you can use it to earn rewards in the game.

Part 1: What Is Adventure Sync in Pokémon GO

Niantic first released the “Pokémon GO Adventure Sync” feature at the end of November 2018. You can enable the feature through the “Settings” menu in Pokémon GO and once enabled, it’ll follow up all your GPS movement when the game is not running. And, once you’ll relaunch the game, it’ll automatically reward you with special credits (usually Buddy Candies).

This means that if you want to earn these rewards, you’ll always have to carry your phone along with you so that it can easily find out your GPS movement. Along with your smartphone’s GPS signal, this feature also fetches data from certain apps to precisely follow up your movement. Of course, your movement won’t be counted if you’re moving too fast, i.e., when you are driving a car.

Over the course of two years, Niantic has released several updates to improve this feature. Recently, in March 2020, the gaming-giant announced an upcoming Pokémon GO update in which the “Adventure Sync” feature will receive significant improvement. As per reports, the upcoming update will provide credits for treadmill running and indoor walking as well.

So, what Pokémon GO Adventure Sync rewards you can receive by enabling the feature. Basically, you’ll receive weekly awards based on the total distance you’ve covered in the entire week. The distance window is divided into three different categories and each category has its own specific rewards. These categories include:

It’s worth noting that 50km is the maximum limit for rewards. If you surpass the 50km benchmark, you won’t receive any additional awards.

Part 3: How to Turn on Pokémon GO Adventure Sync 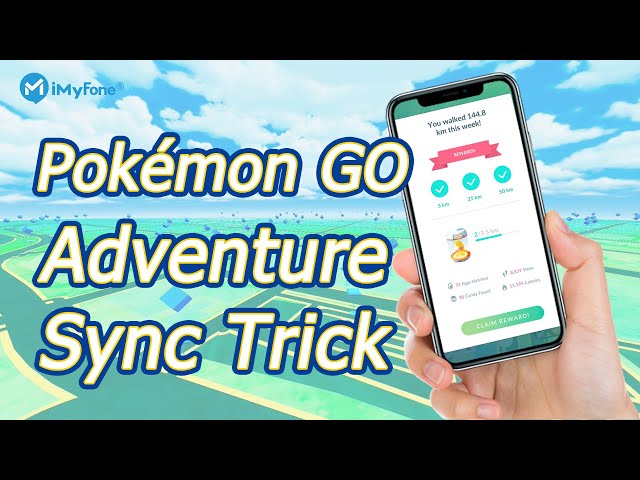 Step 2: Tap “PokéBall” icon to launch the “Main Menu” and then select “SETTINGS”. You’ll be prompted to the “SETTINGS” window.

Step 3: Simply click on the “Adventure Sync” option to enable it. You may also have to provide additional permissions so that Pokémon GO can easily collect data from apps.

Despite being a remarkable Pokémon GO feature, many players have also reported that the feature doesn’t work for their account properly. To believe Pokémon GO forums, there were many cases where Adventure Sync didn’t update the weekly details and as a result, it didn’t reward anything.

Adventure Sync in Pokémon GO is a pretty useful feature, especially if you are a regular Pokémon GO Player. However, it’s also safe to say that not all players have the energy or desire to go out and walk for several kilometers just to collect Pokémon GO Rewards.


This is when Pokémon GO Adventure Sync location changer will help. There are different ways for both iOS and Android that’ll help you trick Pokémon GO into believing that you indeed walked a specific distance, even when you’ve spent the entire day on your couch.

Let’s discuss the two different tricks with Adventure Sync in iOS as well as Android.

Location spoofing is the most reliable trick to change your GPS movement and add more distance to your Adventure Sync. This can be done using a dedicated iOS＆Android location spoofing app like iMyFone AnyTo.

This way your Adventure Sync Pokémon GO activity will continue to increase, even if you’ve not walked a single step. iMyFone AnyTo comes with a wide range of features that make it a reliable tool for location spoofing on iOS＆Android devices. Some of these features include:

Step 1: Start by installing iMyFone AnyTo on your PC/Mac. After the installation process completes, launch the software and click “Get Started”.

Step 2: Connect your phone to the PC/Mac and click “Trust” on the pop-up window on your devices. Entering the passcode to grant the permission.

Step 3: After connected successfully, a map will pop up. Choose “Multi-Spot mode” from the top-right corner.

Step 4: To plan you customized route, you have to pin the locations one by one on the map. You can also set the location by enter the address and coordinates to search bar.

Step 5: Once you’ve selected the locations, all of them will automatically appear in the sidebar.

You're allowed to set the number of round trip times by enter the number into the blank. You can also adjust the speed according to your need by dragging the slider. After the times and speed are set up, click the move to start your GPS movement.

Right now, you have already make your phone move along without moving and walking outside. All the data recorded by your phone will be counted for Pokémon GO.You can now enjoy the Pokémon GO Adventure Sync with iMyFone AnyTo.

In addition,we also provide an Android solution. In this case, we recommend using DeFit, officially known as the debugger of fitness apps. Instead of faking your GPS movement, DeFit will simply add activity records to your Pokémon GO account.

As a result, you’ll receive the Pokémon GO Adventure Sync rewards without having to walk several kilometers. Let’s quickly walk you through the step-by-step process of using DeFit to add activity data on an Android device.

Step 1: Go to Google Play Store and download the “DeFit” app on your smartphone.

Step 2: Launch DeFit and make sure to log in with the same ID you’re using with your Pokémon GO account.

Step 3: In the next window, drag the slider to customize the activity data and then tap the slider to turn on "Sync fitness data".

So, that’s everything you should know about the Pokémon GO Adventure Sync feature. If you weren’t using it earlier, it’s the right time to enable it as it’ll help you get free rewards along with some physical activity. And, in case you’re feeling a bit lazy to go out, make sure to follow the above-mentioned ways to earn rewards while sitting at the comfort of your couch.