The Pokemon Copperajah is a very rare and popular Pokemon character in the game. The Copperajah is believed to be a very ancient Pokemon that came long ago and worked together with humans. The Green skin is water-resistant, and they are somewhat tough to find if you don't know where to look for them and what exactly to do.

But don’t worry, we are here to help. We have come up with everything you need to know about Copperajah, its probable locations, stats, and how you can catch it.

So, let’s get started.

What is Copperajah in Pokemon Go?

One of the supreme characters introduced in the VIII generation of the Pokemon series is the Copperajah. It is an evolution of Cufant that is transformed to a Copperajah after crossing the 34th level.

The general structure of the Copperajah is of an Indian elephant that has a dark green body with a light teal underbelly. This uncommon color is due to the discoloration of copper on the skin with time.

They are resistant to water and poison.  When the Copperajah changes into Gigantamaxes form, the trunk becomes so powerful that it can crush heavy boulders into powder and ground the mountains.

It has excellent attacking skills with solid defensive ability. However, the sword and shield have a steel body that makes them weak against fire moves. The overall base stat of a Copperajah is 500.

Following is the Stat and Range:

The Copperajah is a powerful Pokemon character and a delight for the Pokemon trainers. It has a lot of abilities to fight against the other Pokemon.

Due to its robust body structure, it has the capability to damage with 100% effect. In addition, the strong trunk can invariably crush a heavy rock into minute powder.

In its Gigantamaxes form, the Copperajah has the power to double its weight that becomes a nightmare for its opponents.

It is one of the heaviest Pokemon with solid moves and accurate with its enemy. There are, however, some weaknesses in a Copperajah that can play a spoilsport that can lead to its defeat. Due to its steel body, it cannot withstand fire, fighting, and ground. The sped of the Copperajah is not worth mentioning.

How to Make Copperajah Evolve Faster?

The Copperajah lives in herds that have come from another region. Initially, the Cufant is introduced in the VIII generation of the Pokemon series. 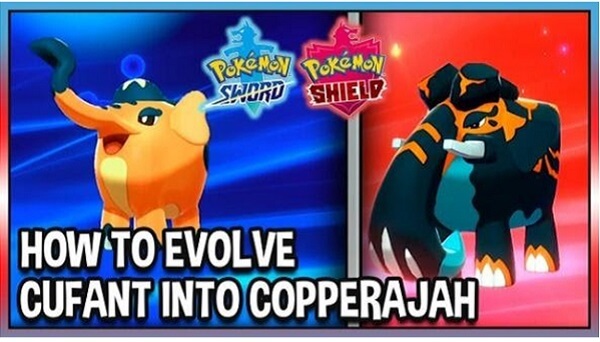 After that, they are trained by the humans who are Pokemon trainers.  You can find Cufant in the Bridge field, but it isn't easy to find them in average weather.

The Cufant starts typically to get evolved into a Copperajah at the 34th level of the game. During this stage, it can make itself more substantial and more extensive in strength and size. The trunk becomes more vigorous than ever that can level a mountain into a plain land.

How to catch more Copperajah in Pokemon Go?

The Pokemon creatures dwell in different parts of the world, and hence once you know the exact position of the Copperajah, you can play Pokemon Go without moving by downloading any of the location changer apps on your android mobile phone.

iMyFone AnyTo is a perfect tool that can change your current location with one click.  It has exciting features that give you the freedom to locate other Pokemon creatures during the game.

This is how it becomes convenient for you to make your Copperajah battle against them.

A Copperajah is one of the strongest Pokemon creatures, but certain drawbacks fail to make it the best competitor. It is to be understood that power doesn't play an offensive role every time. The damage caused is not of great concern, but the moves are more important, and that can transform it to withstand the best and powerful Pokemon creatures.

Copperajah is a Pokemon creature made of steel that is introduced in the VIII Generation of the Pokemon series. It evolves from Cufant in the 34th level of the game. It is based on the Indian Copper Industry, and hence the body color of the elephant has a base of tarnished copper.

Yes. Pokemon Go uses the GPS of your phone to locate the different places of the world. There are various GPS spoofing apps available for download from the Google Play store . AnyTo is a beautiful software with which you can easily change the location of your mobile phone during the game. Furthermore, you can comfortably change the location back to your usual location by just restarting the phone.

The Pokemon Series consists of a variety of video games with excellent graphics. The games are specially created for all age groups.  Some games are free and can easily be downloaded from the internet. Ever since their origin, the Pokemon video games have created a revolution in the gaming industry and continue to rule with its new innovative ideas. The latest trend is the mobile edition that has become popular among users.