How to Fix Siri Not Working on iPhone (iOS 16 Supported)

Siri is not talking or available? It doesn't pick up your voice anymore? Or it is just not responding after you upgrade your iPhone to iOS 16/15/14? As one of the most useful functions on the iPhone, Siri helps us a lot and it will cause some inconvenience if there are any problems with Siri.

In this article, we will offer an instruction which could be the most comprehensive guide to troubleshot iPhone Siri not working problem. We just want to offer as many solutions as possible so the article may be pretty long. Keep patient and find out what can help.

1.1 Is Siri Available on Your Device?

First of all, you should confirm Siri can be used on your device. For now, Apple allows Siri to be available for the following iOS devices –

If you use any other iOS device model, for example, an iPhone 12, then Siri won't talk on it. If your device is in the scope, then go on reading the article.

1.2 Is Your iPhone Microphone Working Well?

Step 1. Clean your microphone hole with a soft toothbrush or a can of compressed air.

Step 2. Remove your iPhone case in case it keeps your voice from the phone.

1.3 Make Sure Siri Has been Turn On

If you don't turn on Siri on iPhone, then, of course, Siri is not talking. Don't think this is impossible - sometimes this circumstance just happens.

Step 2. If you cannot see the option of Siri settings, just go to Settings > General > Restrictions and turn on Siri & Dictation.

1.4 Make Sure Your Request Is Clear and Precise

We all know that Siri may not take what you said when you spoke to it for the first time. But if you speak more and more, then Siri learns more and recognize your voice better. So before talking with Siri, think about what you will say.

Step 1. Make sure that you won't give the wrong request.

1.5. Make Sure Siri Language Is Correct

If the default Siri language is different from the one you are speaking, then Siri is not picking up voice.

If Hey Siri not working on iPhone, or it cannot understand you anymore, probably Hey Siri isn't enabled or Siri is just not working in your device. Just enable or re-enable Hey Siri function to rescue.

2.2 Switch On/Off Dictation on Your iPhone

Siri not recognizing voice may be resulted from iPhone dictation not working. Just switch on or off the dictation function to make Siri re-work.

Step 3. If it is on already, turn it off and return on.

Siri requires an Internet connection, such as Wi-Fi or cellular, to work. If there is any network connection problem, then probably Siri won't work.

If reset network settings don't work, you can also try to reset all the settings of your iPhone by going to Settings > General > Reset > Reset All Settings.

Hey, Siri function won't work and of course, Siri is not talking back if the low power mode is on. Turn it off as the following steps and then speak to Siri again.

And according to our experience, the restarting device often solves lots of issues. And force restart will help more.

Update the iOS system will probably solve some unknown Siri issues, including Siri, won't talk and you can follow the steps as below to do so.

1. Tap on Settings > General on your iPhone.

2. Tap on Software Update and iPhone will check for updates automatically.

3. Tap on Install Now if the new version is available.

If you tried all the methods above but Siri is not talking, still, then the problem may be caused by iOS issues on your iPhone. You can use iMyFone Fixppo Repair tool to fix the issue. As an iOS issue fixing expert, the tool can do more than you can imagine. It can fix iOS problems without any data loss. 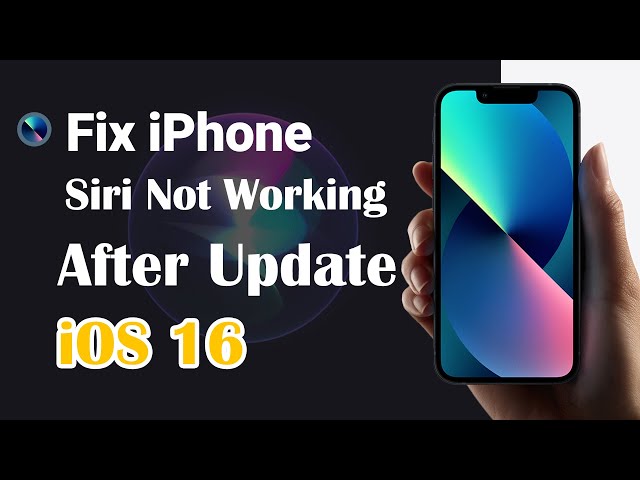 After installing and running the program, connect your iPhone with the program using an original cable. After clicking Standard Mode, Fixppo will show you instructions as below. Follow the instructions to get your device detected.

After you click the Download button on the next screen, iMyFone Fixppo will start to download the corresponding firmware package to fix the iOS problem with your device.

Once the firmware package is downloaded, iMyFone Fixppo (from iOS 9.0 to 16 supported) will fix the Siri issues after you click the button Start to Fix. Your Siri will get back to normal after that.

Now you have 12 tips on how to fix the iPhone Siri not working and all of them work for iOS 16/15/14 and earlier versions. If you know other tips, please leave a comment.