Playing PUBG Mobile on PC is becoming more and more common these days. This is because most serious gamers understand that there are advantages to playing on a PC. But there is no native support for playing PUBG mobile on PC. Thankfully we can use a Android emulator for PUBG to play on PC.

Emulators are software environments that run applications made for mobile programs to work on regular PCs. This guide will go through the best emulators to play PUBG mobile on.

What Is PUBG Mobile

Almost everyone on the internet has heard about PUBG. It stands for Playerunkown’s Battlegrounds. It is a battle royale shooter video game, in fact, it is one of the first battle royale games. PUBG was initially a mod (mod is short for modification, this is when people other than developers make things for games) for another very popular military simulator game called Arma.

Brendan Greene, the actual “Playerunkown” made a mod for Arma 2 called Battle Royale. He took inspiration from the 2000 Japanese film of the same name i.e Battle Royale. The film had the same premise as the game, you fight to the death and become the last man standing.

PUBG became its own separate game in 2016 when Brendan partnered with a Korean studio called Bluehole. But soon they realized the potential of the mobile version of the same game. So, in March of 2017, the world was introduced to PUBG mobile.

The premise of the game is simple, you are dropped into the world with nothing. You can loot around the world looking for weapons, while other players are doing the same. You have to survive in a kill or be killed world. The last man standing wins the game. There is a circle that keeps pushing everyone together to speed up the game.

PUBG Mobile offers a very unique gameplay experience as it blends the thrill of a survival shooter and the fast-paced combat of a team death match-based games. It is this unique formula that makes every game thrilling and every experience unique. No other game can promise this kind of ‘anything can happen’ experience.

How to Play PUBG Mobile on PC

Everybody wants to play PUBG mobile on a computer with a wider screen to enhance the experience. Now we can offer an easier and more excellent solution: mirroring apps! iMyFone MirrorTo is a popular screen mirroring app on the market today. With this app, you can cast PUBG mobile on your computer easily and quickly. Also, you can play Among Us and Minion Rush on computer as you like. If you're also a game host, you can also stream your phone screen and microphone to live streaming platforms like Youtube. 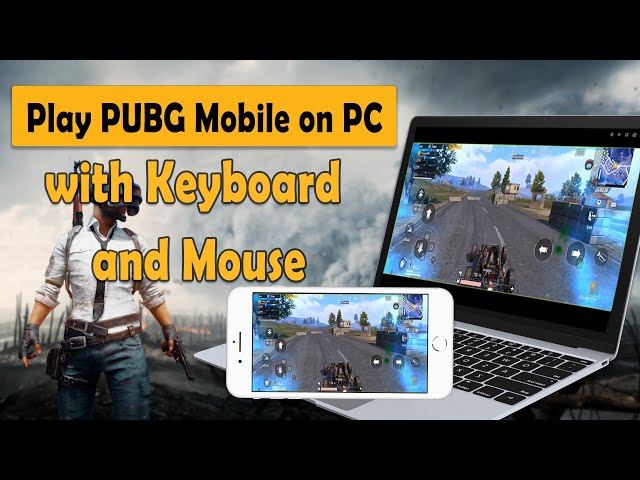 Step 2:Connect your Android device to the PC via a lightning cable and hit Transferring files.

Step 3:Enable the USB debugging on your mobile.

Step 4:Click on Turn On and you’ll see the iMyFone MirrorTo display on your PC.

Step 5:You can play PUBG mobile on your computer now.

You can’t play PUBG Mobile on PC directly. For that, you will need to use a third-party application called an emulator. We will be listing five emulators in this guide, along with their pros and cons. This way you can make a better decision about what emulator works best for you.

BlueStacks is a popular android emulator for PC. You can use BlueStakces to run a variety of different android applications on your PC like WhatsApp and Facebook messenger.

Step 5: PUBG will start downloading on your PC.

Step 6: Once the download is complete, click on the PUBG mobile icon on the home screen to start playing.

Step 2: Open the LDPlayer app and search for PUBG Mobile.

Step 3: Install the PUBG mobile by clicking on it.

Step 4: After the download is complete, just click on the PUBG Mobile icon to start the game.

NoxPlayer is another emulator and is just as famous as BlueStacks. Here are some pros and cons to using NoxPlayer to play PUBG mobile on PC.

Step 3: Open the NoxPlayer and go into the Play Store application.

Step 5: Search for PUBG Mobile on NoxPlayer and select the icon to start the download.

Step 6: After the download is complete, just click on the PUBG Mobile icon to start the game.

MEmu player allows you to download PUBG either directly from the Play Store or sideload an APK of the PUBG mobile if you wish to do so. Here are some advantages of the MEmu player

Step 3: Open the MEmu Player and go into the Play Store application.

Step 5: Search for PUBG mobile and select the icon to start the download.

Step 6: After the download is complete, just click on the PUBG Mobile icon to start the game.

Step 7: The first time you start the game, it will load game resources. So, it might take a little bit of time to start.

Gameloop is a little less known emulator that you can use to play PUBG mobile on PC. Gameloop is the successor to the Tencent Gaming Buddy emulator. So, the same company that makes PUBG mobile also makes Gameloop. Here are some advantages and disadvantages of using Gameloop.

Steps to play PUBG mobile on it.

Step 3: Let Gameloop install all of its updates.

Step 6: Tweak your settings to make sure it is running on the best settings for your PC.

Comparison for 5 Emulators for Playing PUBG

There are two types of players that are looking to play PUBG mobile on PC. The first type is the ones that have low-end computers and can’t run regular PUBG made for PC on their machines.

The second type of player is the ones that want to play on PUBG Mobile on PC because it’s far easier to shoot on PC with a mouse and keyboard. Keeping these things in mind, look at the comparison table to check which emulator works best for your needs.

1 Can I play PUBG mobile on PC using a controller instead of a mouse and keyboard?

2 Is PUBG mobile allowed on PC?

3 Can I play PUBG on PC using the same PUBG mobile account?

PUBG mobile is a fun game to play on your PC. It is especially good for people that have low-end machines that can’t run other games. IMyFone MirrorTo is a great option for you. Also, choosing the best emulator to play PUBG mobile on your PC can be an important choice. This guide has laid down most of the information for you to choose the best emulator for your needs.

But every PC hardware is different, and performance can vary vastly between different machines. So, it is a good idea to try a few emulators and select the best emulator for your PC.