Hisense is one of the leading tech appliance brands globally, offering many different kinds of home appliances. One appliance category is Televisions, in which they have continued to excel.

A feature that Hisense TVs entail is the option of screen mirroring, which is the technique of replicating your phone screen onto a larger one. 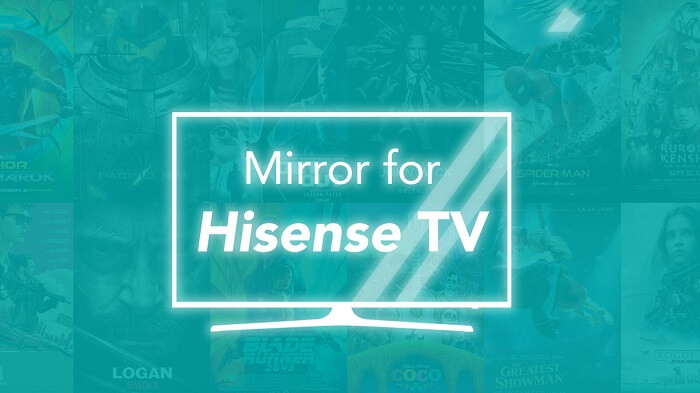 We will be discussing several applications you can use to mirror your phone, along with FAQs related to Hisense TV screen mirroring.

What is Hisense TV

As mentioned before, Hisense is a leading TV manufacturing company. They have created great quality appliances for years, which is why it has become one of the most sought-after brands.

They offer up to 8K certified resolution in their televisions. Their TVs come in a wide variety of software such as Roku and Android. They are highly compatible with all smart mobile devices, which makes the process of mirroring your phone simple.

In addition to the unique features such as Quantum Dot Technology and Dolby Vision-Atmos, Hisense also offers a three-year warranty on all their televisions.

Why or When Need to Screen Mirror Hisense TV

Users often get fed up with constantly streaming movies, shows, and music on their smartphones due to its small screen size. If you want to maximize your user experience, you should mirror your device onto a television such as Hisense.

In addition to music and movies, you can also use the mirroring function for gaming purposes to add further to your playing experience.

As we all know, presentations and meetings are a norm in the business sector, and to conduct them smoothly; a larger screen such as that of a Hisense TV is needed.

The mirroring function makes it less tedious and easier to share your presentations and reports and improves the collaborative forefront of the employees as they can brainstorm more proficiently in the designated conference rooms.

Since various device types are commonly used in classrooms, screen mirroring techniques with cross-platform interoperability are suitable for educational settings.

How to Screen Mirror  Hisense TV

Now that we have discussed why one should use the mirroring option, let's discuss the applications you can use to avail of the Hisense tv screen mirroring function smoothly.

We will be discussing three top mirroring apps in detail: AirBeam TV, MirrorMeister, and AnyView Cast.

Stream your Apple devices to your Hisense TV without the use of cumbersome cords or extra features such as AirPlay.

Learn about AirBeamTV's Screen Mirroring applications for casting your smaller screens to the large screen. It's simple, quick, and secure.

AirBeamTV ensures that you can mirror your smartphone to your Hisense TV in a prolific manner; there will be no lag, the image and video quality will be crisp, and all of it will be done wirelessly.

The reviews surfacing on the internet seem to be on the positive side of the spectrum.

Another great application to mirror your smartphone onto your Hisense TV is MirrorMeister.

MirrorMeister is compatible with Hisense Smart TVs manufactured after 2014, in addition to Android and Roku TVs.

MirrorMeister is a dedicated application for Apple products such as iPads, iPhones, and Macs. It entails wireless mirroring, negating the use of multiple wires and external dongles such as Apple TV.

With this application, you can cast multiple devices, which are not limited to any particular type. So whether you use Chromecast or have a Hisense TV, this application will work for you.

A premium version is available on the market, known as MirrorMeisterPro, which offers an ad-free user experience. In addition, the premium version ensures that casting will be uninterrupted, making your lives a tad bit easier.

The user experience for this application has been positive, except for a few anomalies.

The developer's team also commented on this user's review stating the possible explanations, showing that they value their user's experience.

As MirrorMeister was for Apple devices, Anyview Cast is solely for Android and Windows users. It is another addition to the mirroring apps division, offering high-quality casting. Anyview Cast wirelessly mirrors information from your mobile device to your Hisense TV, allowing you to exchange photographs immediately, watch TV shows, videos, movies, stream live videos and play games. This app is offered in five different languages and is designed for all types of televisions.

How to Screen Hisense TV without Wi-Fi

The HDMI cable is the most basic way to connect a gadget to your TV. Most laptops include an HDMI port. If not, they will most likely have a USB-C or DisplayPort output, both of which may be converted to HDMI with an adapter.

For iPhones and iPads, a Lightning Digital AV Adapter is required, which transforms the lightning connector on the bottom of your smartphone to HDMI. Some Android smartphones include an HDMI connector; however, most will require a USB-C to HDMI adapter. If your Android smartphone utilizes micro USB rather than USB-C, you'll need an MHL (Mobile High-Definition Link) converter.

How to Use AirPlay on Windows 10 - Using AirPlay Explained

How to cast iPhone to Chromecast for Free? [2021 update]

3 Ways to Screen Mirror Your iPad to TV

1 Does Hisense TV have AirPlay?

Hisense TVs do not have Apple AirPlay available. Although, as mentioned above, you can install external third-party applications on your Hisense TV to mirror your phone screen.

In addition, RemoteNOW, a smartphone app developed by Hisense for iOS and Android, is compatible with Hisense P and R Series televisions.

The RemoteNow app will recognize the TV and make all streaming and control options available immediately as long as your compatible TV and smartphone are on the same Wi-Fi network.

2 How do you change the screen on a Hisense TV?

To change the display format, do the following:

3 Can you do a split-screen on Hisense Smart TV?

Hisense TVs do not have an integrated split-screen tool that users can use. However, there are third-party applications such as Anyview Cast, allowing the user to use the split-screen function.

We hope this post has provided a thorough understanding of how to screen mirror hisense tv or for those individuals trying to look up search queries for hisense screen mirroring or how to mirror iphone to hisense tv.